The electronic and magnetic properties of metal-organic compounds are in most cases strongly modified by the presence of a metallic interface. This presents drawbacks, such as the lack of reproducibility in the transport properties of molecular junctions, but also the possibility to induce new charge and spin configurations that are only present at metallic interfaces. Both cases require an atomic scale understanding of the  correlation between structural, electronic and magnetic properties. In our group we study this correlation of local properties, providing insight in the effect of molecule-metal bonding configuration on the transport in single-molecule junctions, and examine different manipulation strategies to control charge and spin, such as the use of magnetic templates or electron doping.

Our recent investigation has been centered on Metal-Phthalocyanine (MPc) molecules and its derivatives. This class of molecules offer a simple,  robust structure which can basically host any transition metal ion at the center. Due to the planar adsorption geometry both metal-ion and ligand states can interact with the substrate, resulting in a completely different interfacial properties. 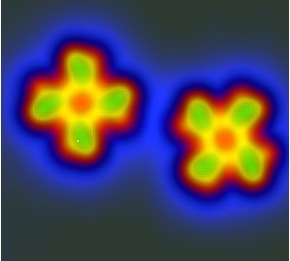 Chiral surfaces have assumed central importance to a diverse range of investigations, including the enantiomerically pure compounds, production of  the amplification of nonlinear optical properties and the asymmetric scattering of spin-polarized electrons. A particularly efficient way of bestowing chirality to surfaces relies on the deposition of organic molecular films.

In a recent study of the adsorption of MPc on the Ag(100) surface [Phys. Rev. Lett. 105 115702 (2010)], we have shown that the chiral induction at the surface can be of purely electronic origin, i.e. restricted to frontier molecular orbitals and leaving the molecular conformation unperturbed.  The electronic chirality is originated from the mismatch between molecular and surface symmetry axis. In this study we have also shown that the mismatch between symmetry axis, together with a proper interplay between molecule-substrate and molecule-molecule interaction, can lead to the transfer of chirality from the adsorption of single-molecules to the self-assembly of the molecular layer. Adding the capability of individual molecules of inverting chirality by a simple rotation on the surface, single-domain homochiral layers are obtained by an Oswald ripening process without the need of any chiral seeding or external perturbation.

Adsorption on a metallic substrate can quench the magnetic moment of the molecule when the interaction involves the 3d states of the metal ion responsible for the magnetic properties [Phys. Rev. B 85, 155437 (2012)]. However, when the interaction involves ligand orbitals, as it is the case of CuPc and NiPc, we have demonstrated that new spins can be induced in delocalized Π orbitals by charge transfer from the substrate [Nature Commun. 2:490 (2011)]. We study the magnetic induction by probing the Kondo resonance that results from the interaction between the molecular and metallic (substrate) spins. The complex Kondo interaction in these molecules couples to vibrational and magnetic inelastic excitations that we use to study the intramolecular spin coupling and dynamics.

By using the tip to move molecules one by one, we can create artificial clusters with well-defined geometry to explore the effect intermolecular interactions on the electronic and magnetic properties of the molecule. In the case of CuPc, we found that the latter dramatically depend on the bonding environment of each molecule.

Topographic and spectroscopic images of a 3×3 cluster of CuPc molecules constructed by manipulating irregular clusters. The maps of the molecular orbitals and of the Kondo resonance indicate that the electronic and magnetic properties of each molecule dramatically depends on the number of intermolecular bonds.

Manipulating the molecular charge and spin by Li doping 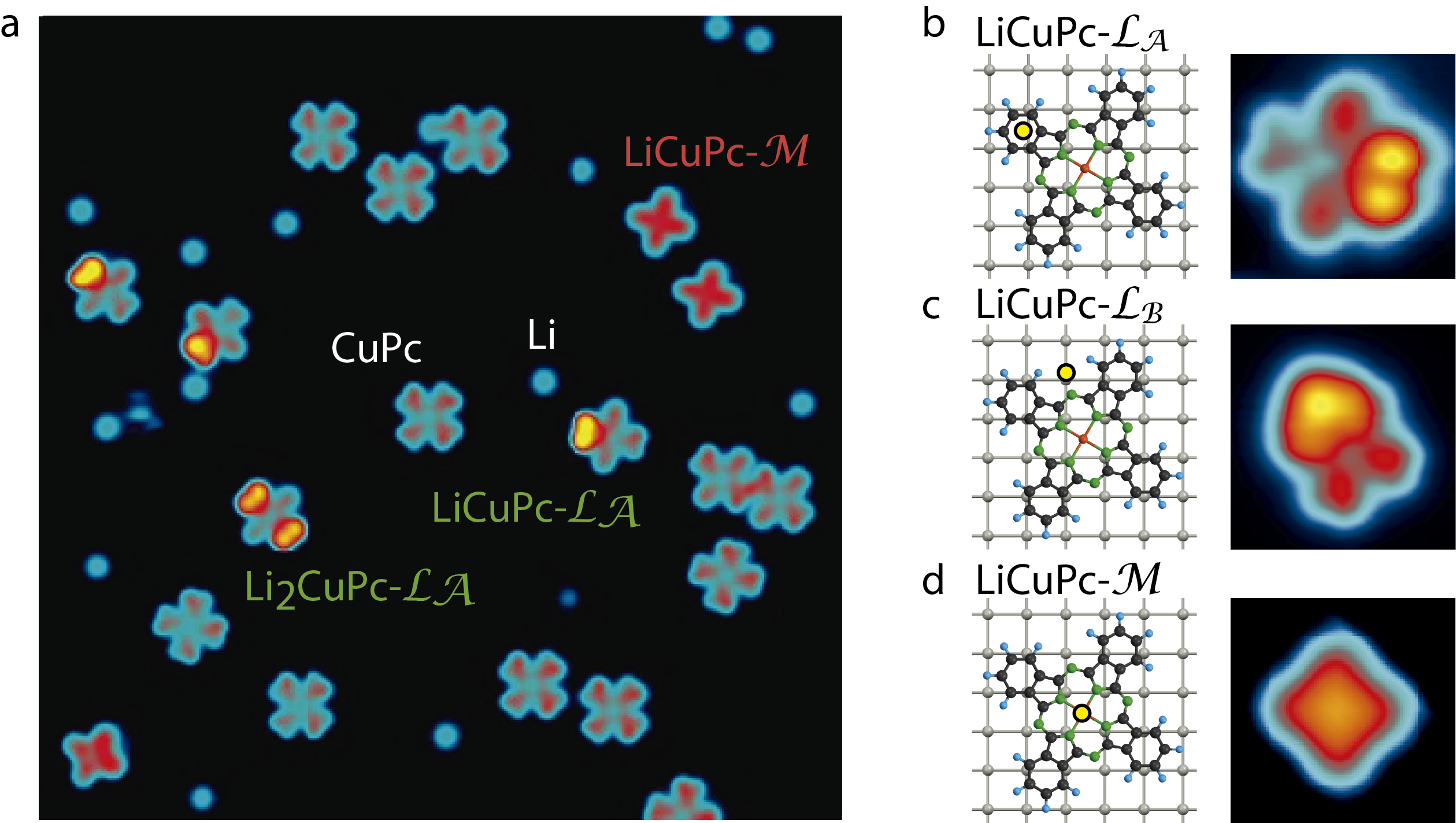 Doping single CuPc with alkali atoms. (a) Adding Li to the Ag(100) surface precovered with a few CuPc molecules result in different Li-CuPc complexes (b-d) where, depending on the bonding configuration, the Li donates an electron either to metal (Cu) or ligand orbitals.

Electron doping using alkali atoms is an effective way of modifying the electronic properties of molecular films. At the metallic interface, the complex three-body charge equilibrium between molecule-dopant-substrate stabilizes different charge and spin configurations that depend on the number and position of the dopants, as we have recently shown by doping single MPc with Li atoms [Nature Mater. 12, 337 (2013)]. As we increase the number of Li dopants by using the STM tip to dope molecules atom by atom, we find that the role of the substrate changes from donor to acceptor, leading to a saturation of transferred charge at values smaller than that found in bulk films. We also investigate electrostatic shifts of the molecular levels induced either directly for the case of Li ions bound to the molecule, or mediated by the substrate for the case of nearby ions. 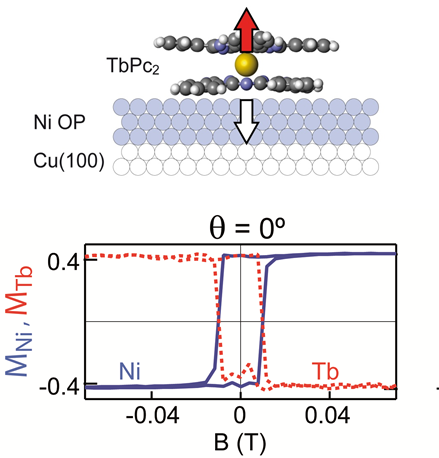 Single molecule magnets (SMMs) represent the smallest known bi-stable magnetic systems, thus making them ideal candidates for both classical and quantum computing applications.  Unfortunately, because of the competition between thermal spin fluctuations and magnetic anisotropy, SMMs display remanent magnetization only at low temperature. In the case of  Tb double-decker complexes (TbPc2) magnetic hysteresis loops can only be observed below 7 K for a measuring time scale of 100s. By using a Ni(111) ferromagnetic (FM) substrate, we have shown that the magnetic moment TbPc2 can be stabilized for temperatures above 100 K [Phys. Rev. Lett. 107,177205 (2011)]. The hysteresis loops of obtained by XMCD for Ni and Tb indicates that the molecule couples antiferromagnetically (AFM) to the Ni substrate. The magnitude of the exchange coupling can be manipulated by doping the interface with electron acceptor or donor atoms.

In a similar experiment, we investigate TbPc2 monolayers deposited on metallic and oxide AFM substrates to demonstrate that exchange bias can also be used in hybrid metal-organic heterostructures to stabilize magnetic moments [Nano Lett. 12, 5703(2012)].